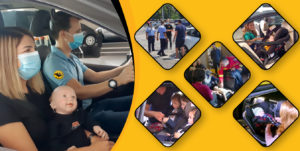 Siguranta Auto Copii® Foundation is a non-profit organization that has set itself a pioneering mission in Romania, namely to change the attitude of parents and educators in Romania regarding the mode of transport of children in the car, thus modifying the negative statistics that places Romania in first place in the European Union in terms of the number of accidents with the victim among child passengers.

The statistical data available for 2019 indicate a number of 122 deaths as a result of a road accident among children aged 0 to 12, children who were passengers at the time of the traffic event, well above the European Union average (9 out of 1 million children under 15) or compared to the average of countries such as the United Kingdom, Sweden or Norway (4 deaths per 1 million children under 15). If we add up the number of deaths in the last 5 years among children aged 0-12, we find with sadness that the figure rises to over 900. In addition to these deaths, thousands of other children have suffered serious injuries, some disabling for life, things that are difficult to quantify other than in tears and pain.

Sadly, in over 76% of cases, the cause of death or serious injury to these children was not using a special car seat or seat belts. The Children’s Car Safety Foundation has set itself an ambitious goal, namely to bring the number of deaths due to road accidents among minors up to 12 years to 0 by 2030. It seems a utopian goal for now, but through the strategy developed with our partners in the Road Brigade, the Department for Emergency Situations, as well as with members of civil society, psychologists, doctors, teachers are convinced that it can be achieved.

Prevention is much easier than treating this and what we set out to do. Nothing compares to the suffering of a child or the suffering of his parents, and the road accident is not an incurable disease, it is something that can be prevented through education, correct information and compliance with the legislation in force at national and European level.

It invites you to discover our projects, to identify those in which you think they cannot become partners because where there are more, results are obtained faster, easier.